On Friday the Office for National Statistics (ONS) published two more articles on COVID-19 related mortality, expanding further on the critical range of analysis that they have been publishing to help us all better understand the nature and impact of this pandemic.

As I’ve previously written whilst the rapid surveillance data published by Public Health Wales is an important timely indicator of confirmed COVID-19 deaths, the ONS data based on death registrations is the most comprehensive set of information on mortality. As such it allows for in-depth analysis across Wales. We are working with ONS to develop their range of analysis for Wales including on COVID-19 related deaths by occupation and ethnicity.

In their article looking at mortality across the UK  in March and April 2020, the ONS data show that in general mortality in Wales did not increase as much as a result of COVID-19 compared with England and Scotland, and the virus has been responsible for a smaller share of deaths than England.

For this purpose ONS use age-standardised mortality rates which are a better comparative measure of mortality between areas than the number of deaths, as they account for the population size and age structure.

The ONS article showed that in March and April, Wales saw a relatively lower rate of COVID-19 related deaths per head of the population than England and Scotland. They also showed a similar pattern for deaths from all causes. Furthermore, deaths in Wales were also less likely to be COVID-19 related (22% of deaths) compared with the UK average (26%).

It is of course the case there has been excess deaths in Wales over the course of the pandemic – that is there have been more deaths than we would expect at this time of year. In Wales this is estimated at around 1,450 more deaths over March and April than the 5 year average for this time of year, (and nearly 2,200 by June 5 according to the latest ONS weekly deaths bulletin). This was 25% more deaths, lower than England (46%) and Scotland (37%). 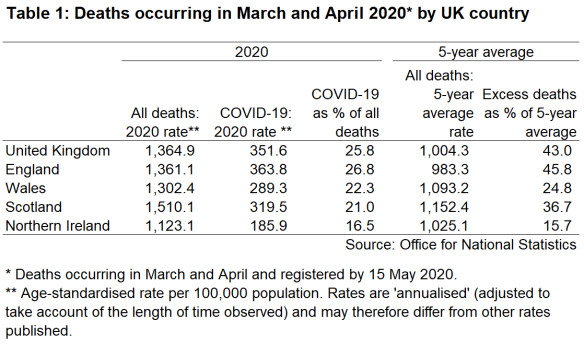 It is a similar story when comparing with regions of England. London has the largest age standardised COVID-19 mortality rate across England and Wales, between March and May 2020. The figure for Wales is similar to the East Midlands, East of England and South East, and otherwise higher only than the South West.

We can only speculate at present about the reasons for the different patterns across the UK. There will be a relationship with a number of factors, including age, socio-economic characteristics and ethnicity along with other wider factors such as deprivation, housing, obesity and pre-existing underlying health conditions.

Mortality varies across Wales, but is highest in South Wales

ONS also published an article on Friday presenting the latest position on mortality across local health boards and local authorities. There has been a great deal of interest in the impact of the pandemic in different parts of Wales, particularly in North Wales, in recent weeks. The position for some parts of Wales is difficult to measure from the Public Health Wales surveillance data due to cross-border issues, with some Welsh residents dying in English hospitals and therefore not included in the Public Health Wales (PHW) data. There will also be issues in comparing areas where there are different rates of people in care homes, which do not have complete coverage within the PHW data. Similar to the comparisons across the UK it is also important to understand the relative population size of areas – the Betsi Cadwaladr University Health Board area is the largest health board by population size.

The ONS article is based on where a person lived and again also uses age-standardised rates to account for demographic factors.

At local authority level, there was considerable variation within Wales. In general, the highest rates were in south Wales with the lowest being in Ceredigion.

At health board level, the lowest rates were seen in Hywel Dda; rates in Powys and Betsi Cadwaladr were also below the Wales average. Rates in Cardiff & Vale and Cwm Taf Morgannwg were highest. But of course there is also variation within a health board area. Within Betsi Cadwaladr, rates are highest in the North East (Denbighshire, Flintshire and Wrexham) and lowest in the Isle of Anglesey.

The ONS data is broken down by month and therefore also allows us to see how the pandemic has differed in nature across Wales. The highest rates on a monthly basis were seen in South Wales in April, but in May some of the local authorities in North Wales have the highest age-standardised rates. Whilst the rates for South Wales declined in May, the mortality rates in North Wales authorities were more stable. But even in those areas of North Wales, in May the mortality rates are fewer than 40 deaths per 100,000 people – in contrast in April, 11 local authorities had mortality rates of over 40 per 100,000. This highlights the decline in mortality during May, and also the different picture in North Wales, which has seen a less pronounced “peak” than other areas in Wales. 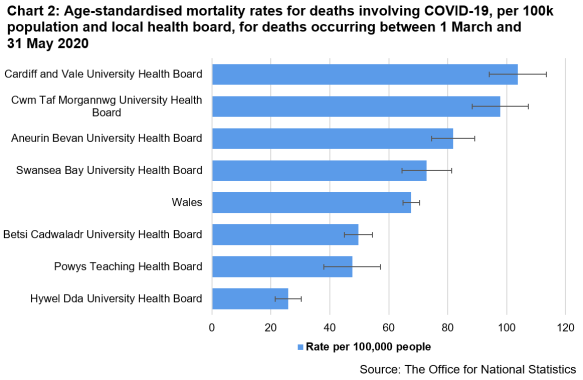 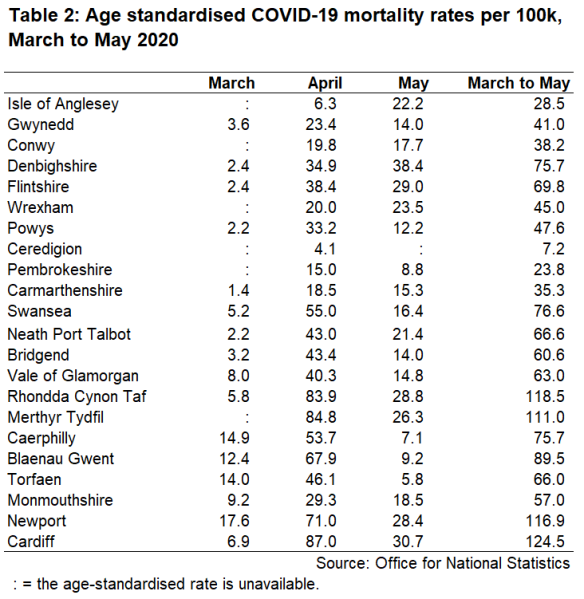