You may already have come across the Lle geo-portal, an open data platform co-developed by the Geography & Technology branch at Welsh Government and Natural Resources Wales. The site aims to make spatial data more openly available to the public, to satisfy requests for data and services that we would otherwise have satisfied using manual request processes.

As you might expect, the audience to date has consisted mainly of special interest groups, ranging from planning consultants to geo-caching communities. The site has been developed by our existing team and evolved gradually over the past couple of years to provide data and services using formats and protocols that are commonly requested and interoperable, this makes this information more discoverable.

Why do we need Lle?

Consultations, statistical releases, and other government policies often call for one or more datasets to be made available externally to the public as a map of some kind. In the past this often involved the production of tens or hundreds of documents containing static maps intended to cover a particular region.

While taking a digital approach to map publication has brought improvements to efficiency and user-engagement, each mapping application was largely a bespoke development for a specific purpose; such as a particular consultation. Since we now receive an increasing number of requests for these products, we’ve decided to develop a more generic mapping solution to accommodate the majority of use-cases.

We developed a new mapping feature which you can access by visiting http://lle.gov.wales/map. Users are able to configure the map as they require and circulate a link to the same view. 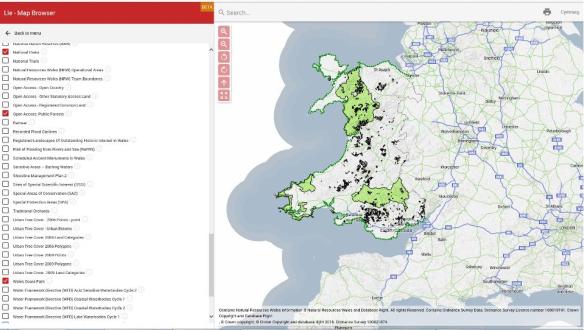 To coincide with the recent 50th anniversary of the Aberfan disaster we also released a unique series of images displaying an assortment of aerial imagery for the area dating back to 1945 – http://lle.gov.wales/map/aberfan.

To mark the 50th anniversary of the Aberfan disaster, Welsh Government created a unique series of images that show the landscape around the village before and after the 1966 disaster.

Now for the technical bit

The mapping functionality has been developed using a variety of modern open source components. Predominately ASP.NET MVC, Angular 2, and OpenLayers 3 (although it’s been built in such a way that we could point to another mapping API in the future), and Material Design. As with the rest of the Lle geo-portal, it’s hosted on the Azure cloud, making use of PaaS (Platform as a Service) rather then traditional VMs (Virtual Machines) wherever possible.

We have a large list of requirements currently being worked through. Some of the big ones for 2017 include –

We’ll update you on the progress of these through this blog.

1 thought on “Many Maps in one Lle”