Each year, Welsh Government recruits a number of university students to do a year-long placement as part of their degree.

The Statistical Services Division usually takes on 3 students, and this year’s – Dylan, Niamh, and Yasmin – have written some reflections on their experiences as their placements draw to an end. This includes insight into their individual roles, as well as some collaborative projects they have worked on. Their office based placements changed overnight in March, to become a virtual experience, but their continued input, enthusiasm and team work through this phase has shown that student placements, whilst different, can still work in this new working environment. 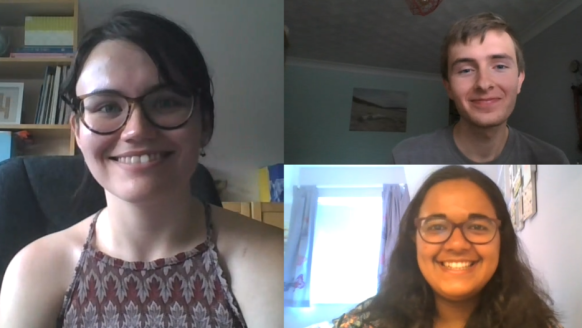 I’ve spent my placement working with both the Health and Social Services and Post-16 Education teams and I’ve come a long way since starting my role in July last year, having not held a full-time job before.

I’ve rapidly picked up new skills in data manipulation and statistical programming as I’ve had the opportunity to learn these things as I go along. Working here has built my confidence in using my own judgement and suggesting new ways of doing things as I’ve always been engaged with my teams and involved in decision making processes.

It’s also satisfying to be doing meaningful work; I have filled an important role in producing a number of releases on different subjects ranging from GP surgeries to outcomes of work-based education, produced regular reports on calls to NHS Direct and more recently done various pieces of work relating to the COVID-19 situation. Overall, it’s been a valuable learning experience!

My placement has been based within the School Workforce Data Team. Throughout the past year, I’ve had opportunities to work on various projects. This includes conducting my own data collection for a small release, creating scenario models for policy colleagues, and even developing the publication of our new census. I was familiar with statistical methods and programming languages from previous studies, but my placement has allowed me to actually apply these skills to a practical setting.

My team is embedded within the Education policy division, and therefore separate to the Knowledge and Analytical Services division where the majority of statisticians are based. This provided opportunities to work more closely alongside policy colleagues, and was a unique experience which developed my understanding of how my work feeds into the overall output of Welsh Government.

Even though our time in the office was cut short, I have thoroughly enjoyed my time at Welsh Government, and I am incredibly grateful for the support and guidance I have received from my team. I am also looking forward to continuing my career in statistics after graduating!

I’ve spent my year working as part of the Social Justice Statistics team, specifically working on releases related to the Welsh Index of Multiple Deprivation (WIMD), Gypsy & Traveller Caravan Count, and Equality & Diversity statistics. Looking back, I feel I settled into my role very quickly; the team itself is quite small so it was easy to get to know each member and what their roles were. Everyone was very welcoming, both within my team and desk pod, and the Stats division as a whole, which made the transition into working life much less daunting than I was expecting!

My work this year has given me the chance to develop my analysis skills using Excel and Access, and also introduced me to other statistical software like SAS. One of the highlights has been developing new analysis of areas of deep-rooted deprivation as part of the WIMD 2019 release. From the initial analysis to working out how best to package the data to be released to users, I have gained insight into nearly all the aspects of producing a statistical release and this has given me a greater appreciation for the value of Official Statistics.

Another part of my role that I’ve greatly enjoyed has been seeing how users engage with the statistics and guidance we publish, both through attending user group meetings and monitoring responses in news articles and social media posts.

In addition to our individual roles, we have also had opportunities to work together on other projects during the year. One of these was organising the annual Stats Christmas lunch, and it’s fair to say the three of us learnt a lot about Christmas meal pre-orders and quiz making! We think(/hope!) that everyone agreed it went successfully, and it was definitely a valuable experience to have.

At the end of last year, Niamh and Yasmin set up a new branch of the Government Student Network for students on placements in Wales and South West England.

Soon after starting our roles, we felt placement students within Wales and the South West would benefit from having a specific network of peers to support each other and create opportunities to learn more about working in the Civil Service.

After discussing this idea with the GSN London committee, we created a new committee with another Welsh Government student and three students from the Office for National Statistics and began to plan the new Government Student Network for Wales and South West. From December, we began recruiting students from departments across the region and eventually had over forty students sign up!

Within the network, we produced monthly newsletters, hosted Insight Events, established a shadowing scheme (which was due to take place in March but was unfortunately cancelled due to COVID-19), and hosted socials. Once it was clear we could no longer continue with face-to-face events, we adapted our plans to allow the network to continue virtually. This included sending out written ‘Insight Interviews’ in place of the talks we would have hosted, and holding a virtual Insight Week – where we organised 6 talks from different departments to take place over a week at the end of June.

Whilst our year may not be ending the way we originally thought it would, the three of us are very grateful to have been given the opportunity to spend our placement years at Welsh Government and we have each gained a wealth of experience that will aid us in our final year at university and our future careers. We’d like to thank everyone in both our teams and Stats division as a whole for making us feel so welcome and supporting us throughout the year.